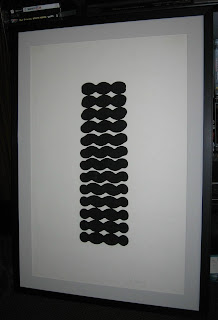 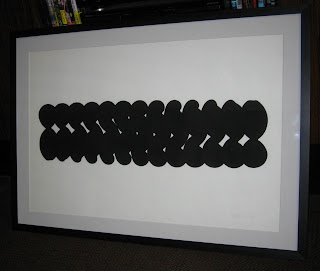 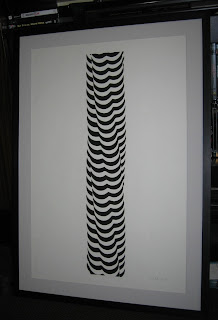 Cycloid VI, serigraph in black, 1966
.
.
.
Peter created the "Cycloid" prints at the Curwen Press, with assistance from master printer, Stanley Jones. Peter and Stanley had been students together at the Slade. I acquired these from a private dealer in London after an introduction from Rory Walsh. There are several more available, if you're interested and I'll provide contact information for this dealer: info@PeterSchmidtWeb.com
Posted by John Emr - Curator at 5:15 PM No comments:

This is the painting most of us know as "Evening Star". It's one of Peter Schmidt's best known works. Brian Eno bought this small acrylic of a sunset in Tenerife, long before it graced the cover of the album "Evening Star". In Peter's last letter prior to his death in the Canary Islands, to friends Eggert and Ingolfur in Iceland, he described hoping to experience once again the inspiration which caused him to create this painting(see the "Letters" section at the bottom of the "Miscellaneous" page at http://www.peterschmidtweb.com/). An image of "Evening Star" can be seen in the painting "Portrait of Eno with Allusions".
.
The artist Russell Mills described to me the technique Peter used in it's creation: "I don't think he had a specific term for it. Necessarily he worked slowly, building the painting in incremental layers of gradated washes of increasing tones from light to dark, using a gum like masking medium to protect the paler lines as the dark ones were applied. It does have a passing resemblance to the line by line process that modern inkjet printers use."
.
"Evening Star", the album by Robert Fripp and Brian Eno album was recently remastered and released anew, jointly, on Fripp's Discipline and Eno's OPAL imprints. As such, the artist's will receive their full share of the royalties from it's sales. It is an important document in the canon of all three artists. "Evening Star", and the expanded, and remastered "No Pussyfooting" are now available at www.DGMLive.com and www.enoshop.co.uk.
Posted by John Emr - Curator at 7:41 PM No comments: